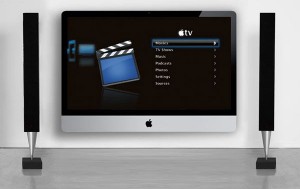 If, like me, you were expecting at least two brand new devices from Apple in 2014 you may want to sit down as it sounds like at least one of them has been shelved for now.

Many of us were planning on seeing the Apple iWatch and the new Apple HDTV to make an appearance in 2014 but news has landed here at GadgetyNews that Apple may have put its plans for a new Apple HDTV on hold.

Apparently the word is that Apple will be concentrating on wearable devices next year. So, at least that means you might be able to wear an iWatch next year.

According to sources in the TV supply chain, it appears that Apple’s long-rumored TV plans, which were far from concrete anyway, have been put on hold again, possibly to be replaced by a rollout of wearable devices. Although many financial and industry analysts have been speculating about Apple’s entrance into the TV business via an actual TV (instead of the Apple TV “hobby” set-top-box) for years, during the last year the rumor-mill has shifted into high gear about a 2014 introduction. Indeed, our own information from TV supply chain sources pointed to the fact that Apple appeared to be lining up resources for a product introduction in the second half of 2014, likely with 2-3 large screen sizes and 4K resolution.

The Apple iWatch will apparently be Apple’s focus in 2014 and, as we’ve have already seen a number of company’s such as Samsung and Sony release their devices, with other manufacturers like Google, HTC and LG rumoured to be working on theirs, it stands to reason that Apple will want it’s slice of the wearable tech pie.