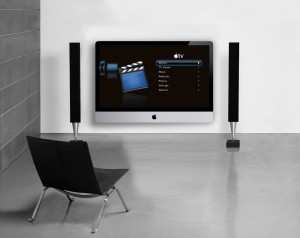 I’ve often toyed with the idea of replacing my telly with an iMac but as the Apple TV set has now been given a rumoured release date and is coming in 3 different sizes – this may be my replacement TV fairly soon!

Apple TV or iTV (as long as the current ITV services don’t mind) sounds like it will be more than just an Apple branded smart gogglebox.

With word out that Sharp is working on a huge Retina display this could well be the eye-fest we have all be waiting for. But a sharp scree (arf!) wont be the extent of the iTV’s tricks.

The Apple TV is said to be packing the same processor as the recently confirmed iPad 3. This points to its brains being at least least a dual-core A5 but, if talk is true, will more-than-likely be a quad-core A6.

The new Apple smart box (can’t really call it an idot box can I?) will come complete with the fruity one’s own vocal assistant, Siri. So, at least when we’re shouting at the nonsense on telly the TV could actually answer back.

There have already been rumours circulating that have whispered that the iTV will be released next year but the current source of the moment goes one better for when to expect the 32in and 55in models.

There will, apparently, be another size as the grapevine reckons we should expect 3 sizes – start saving as these televisions wont be cheap when they arrive in September 2012.

Word is that, thanks to all the Apple cleverness you can price the equivalent TV from Samsung or LG and then double the price to get a ballpark figure.