Apple iTablet Gets More Details, a Launch Date and Perhaps a Realease Date 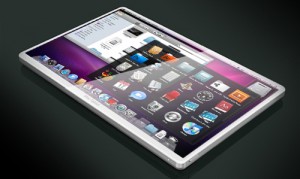 The interwebs remain ablaze with iProd/iTablet rumours and it doesn’t look like they’re gonna calm down anytime soon.

iLounge is fanning the flames using the same source that gave it an early heads-up on the new iPod Nano 5G.

Word is that the Apply one has developed not one, not two but three prototypes for the glorious flatbed.

It looks like Apple toyed with a 7 inch screen but chucked that out in favour of a 10.7 inch poke and prod friendly number which should appear on the retail version.

Chances are that the iProd with follow the much loved aesthetics of the iPhone 3GS – that means a glossy slab with a curved back.

It will sport a 3G networking option and that screen should have “720p or thereabouts” resolution.

The focus of the device will be media just like the iPhones and iPod touches, though it’s suggested that it will also serve as a replacement for books and magazines (i.e. an e-book reader).

The iTablet isn’t designed to compete directly with netbooks apparently.

So when will we get our hands on the Apple tablet? Not until May or June 2010 apparently but itâ€™ll be announced at a big event on January 19.

That is if Steve Jobs gives it the green for go.

That naughty little tipster hints that Jobs is still assessing the product.