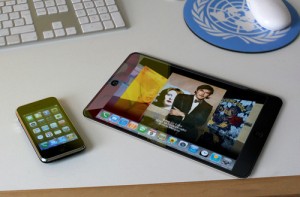 This could be the bestest practical joke in history or the new Apple tablet is going to be called the iSlate (one of the names that has been bounced around for a while).

As I’ve reported before, I’m expected a show-and-tell in a few weeks and everything does seem to be slotting into place.

It appears that Apple has bought up the domain name iSlate.com thus silencing any speculation people may still have and this small matter has no doubt gone towards the company’s shares reaching an all-time-high over the festive season.

According to reports, Apple has also booked a San Francisco convention centre for 26th January, where the announcement is scheduled to be made to the world. Apple used the same Yerba Buena Center for the Arts for a presentation when Steve Jobs returned after recovering from liver disease.

So – I for one will be keeping a close eye on the iSlate.com site and will be expecting the sight of iPhone-esque beauty with a 10-inch screen.