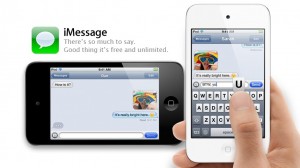 The iPod Nano wasn’t the only music machine to get a make-over at today’s iPhone 4S bash. The iPod Touch got some tweakage too!

With Apple apparently controlling 78% of the portable media player (PMP) market this year may well be another bumper Christmas for the fruity tech purveyor thanks to the new iPod Touch.

The latest iPod Touch runs iOS 5 – this means that you get tabbed browsing, advanced camera features, and built-in Twitter integration for several apps – and it’s available in WHITE! WOW!

It also offers iMessage, a free messaging service for chatting to others kitted out with an iPod Touch, iPhone or iPad. Annoyingly though – iMessage requires a Wi-Fi connection so not quite the BBM killer I was hoping for.

Whilst there’s much rejoicing over the new Nano and Touch there was no sign of doing anything new with the iPod classic – could this be the end of having 160GB of music with you in an iThingy?

The new iPod Touch is all set to arrive alongside the iOS 5 system rollout and will be available to buy from October 12th.