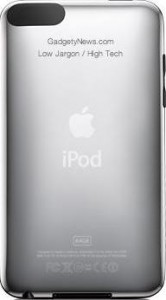 Notice the pic with the free engraving service?

As Mr Schiller said last night: “There’s something for everyone” on the Touch and iPhone, Schiller says, with over 21,000 titles for games and entertainment in the App Store.

He went on to say:

“$199 is a magic price point in the iPod market” so the iPod Touch will be lowered in price to just $199 for the 8GB model. For $299, customers can get a 32GB model, and for just $399 a 64GB model will be added to store shelves. It will be up to 50 per cent faster in “almost everything you do”. “This is what the next generation games will be using”, apparently.

It was all going so well with the Nano 5G getting a video camera but then the unspeakable happened…….

None of the Touch range will be similarly equipped!

Steve Jobs who returned to the stage was interviewed by David Pogue of the New York Times after the launch and was posed that very question.

His answer was: “Originally, we weren’t exactly sure how to market the Touch. Was it an iPhone without the phone? Was it a pocket computer? What happened was, what customers told us was, they started to see it as a game machine,’ he said. ‘We started to market it that way, and it just took off. And now what we really see is it’s the lowest-cost way to the App Store, and that’s the big draw. So what we were focused on is just reducing the price to $199. We don’t need to add new stuff. We need to get the price down where everyone can afford it.”

Apple seem to want to attract folk over to the fruity side with a cheaper gaming challenger to the PSP and DS than to add some extra functionality.

The other way of looking at it would be that Apple want to test the water using the Nano before rolling it out on it’s premium touchscreen player.

Leaving no stone unturned Pogue also asked why the Nano only shoots video.

Apparently that’s a ‘technical’ decision as the sensors you need to record video are extremely thin and as such are able to be squeezed into the slim Nano.

However, the ones with enough resolution for stills, especially with autofocus (like the sensor in the iPhone), are too thick for the Nano right now.

There you go my gadgety faithful.