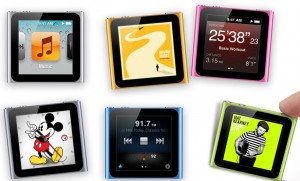 Apple has refreshed the iPod Nano and revealed the changes at today’s iPhone 4S event.

The new Nano now operates on a single big icon swipe rather than prodding at the old grid of four. It has also enjoyed a price cut.

Also you will no longer require accessories such as the Nike+ sports package for tracking your runs as the little fellas will have the sensors baked in as standard.

Apple has obviously embraced the iPod Nano watch love as it has launched no fewer than 16 new clock faces – including a Mickey Mouse one!