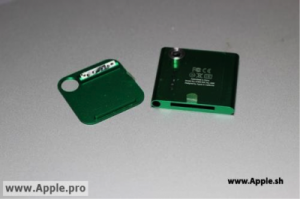 In September 2011 there was a distinct lack of nano love. Since 2005 September was the time for a new iPod nano but we’ve been kept waiting for the seventh generation and it’s packing a camera!

How we rejoiced when the Apple baby was given a camera back in it’s 5th gen form – only to have it removed in order to shrink the nano. OK, so it got a touchscreen refresh last year.

It looks as if Apple could be supplying a snapper to the iPod nano 7.

These leaked pictures from a Japanese site clearly shows a hole on the clip and what looks suspiciously like a lens.

This backs up pictures of a nano case that were doing the rounds back in the middle of last year. That item had a camera-friendly hole in them; but you know how reliable case leaks are 😉

The camera the new nano will be packing is said to be just 1.3-megapixel and Chinese site M.I.C has stated that the leaked pictures show a two-month-old prototype; one with “big problems”. Apparently its auto iris lens is causing blurring in bright conditions as well as taking “overexposed photos”.

Rumour has it that the new nano will appear in March/April this year.