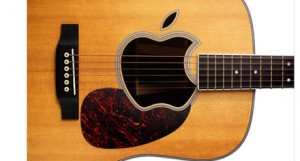 There’s been much guessing as to when this would happen but Apple has finally released an invitation to UK journo types offering them the chance to join in a music-themed event next Wednesday, 1 September.

The event, which is a week ahead of the rumoured date of 7 September, will kick off at 6pm on Wednesday.

UK folk will get to watch a live link from the event in California which wil reveal just what the company has in store.

Now, unless Apple are actually releasing a branded acoustic guitar, I reckon it’s a safe bet that the event will be iPod-based.

I’m expecting it’ll be a new iPod Touch and Nano being unveiled but there is a chance that there could be announcements regarding iTunes launching in the cloud and possibly that iTV (Apple TV).

What do you want to see happen at Apple’s Wednesday event?