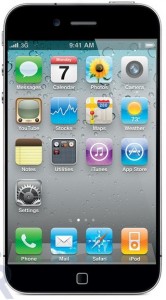 It’s been a while so here’s a new bit of iPhone 5 news for you. You notice I said iPhone 5 and not 4S? Read on Gadgety fans!

Word has it that Apple will officially unveil their muchly anticipated iPhone 5 August – a month earlier than the guessed September slot.

Not only that. We are all to expect spankingly new hardware. This might all be too much for some readers…

That’s as much as they’re saying at the moment but they do say that the iPhone 4S devices that are out and about as I type are developer test models with upgraded innards.

Latest reports have the iPhone 5 packing the same ARM A5 1GHz dual-core processor as the iPad 2, an 8-megapixel camera with 1080p Full HD video recording capabilities and a larger 720p HD display.

â€œApple may hold an event in the beginning or middle of August to announce the new iPhone, with availability to follow in the last week of August,â€ adds the loose-lipped leaker.

Apple is expected to launch the iPhone 5 when it squirts out iOS 5 which recently had its outing at WWDC 2011.