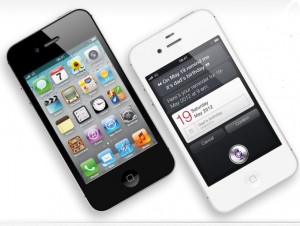 Ok – so no iPhone 5 but there is iPhone 4S. It looks the same but what is different?

Well, you can now have the power of the iPad in your pocket as the iPhone 4S is packing the A5 dual core processor from its larger stable-mate and there’s Siri. More about that in a bit.

You can also get the new iPhone in ‘super-size’ – that’s 64GB of internal storage folks! That should keep you music lovers and app fiends happy 🙂

Apple reckons that the 4S will wear the ‘S’ badge with pride and is quoting a 7x speed improvement. Other facts and figures are you can expect eight hours of talk time over 3G, or 10 hours of video playback.

The camera has had the expected upgrade from 5MP in the iPhone 4 to eight megapixels with a backlit CMOS sensor with an f2.4 aperture.

For movies the new iPhone can handle 1080p full HD video and, like the iPad 2, wirelessly mirror its screen over AirPlay to an Apple TV. Nice touch!

Apple is also claiming max download speeds over 3G are now 14.4Mbps – depending on your network of course 😉

Siri allows you to talk to the iPhone naturally and it will give you the answers. It’ll be like having a very clever person at hand all the time! All you have to do is hold the home button down and speak normally – it will work it out. No need for preset commands here.

Siri learns your voice as you chat and will get more accurate as you use it, with support for English, French, and German.

Being British the most important question would be what the weather’s like, and Siri will bring up a report. Ask it for the definition of a word and it will give you the answer via Wolfram Alfra.

Siri can hand you local restaurants, ranked by rating, search the web for you, read your notifications out to you should your hands and eyes be busy (driving) and you can even ask Siri to set your alarms.

It can even tell you “how to get home” and check iCloud for a song if it’s not stored locally on your phone, but perhaps most impressively, if you tell it to book a meeting in your calendar with a colleague at a certain time, it’ll even tell you if you already have something on then and suggest a time to reschedule.

Siri’s linked up to the iPhone 4S GPS-powered so you can even ask it to give you reminders based on where you are. Have a habit of leaving your keys on your desk? Tell Siri to get you to check you have your keys as soon as you start to leave the office

If you like dictating letters Siri will write them out as you rant.

I’m sure there’s a lot of nervous secretaries now 😛

Siri is only possible on the iPhone 4S thanks to it being loaded with the A5 chip.