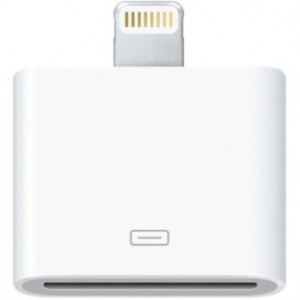 If the fact that you’re already surrounded by iPhone docks and speakers with the old 30-pin connector has been holding you back from purchasing the new iPhone 5 then I bring good news. Apple has started shipping its Lightning to 30-pin adapter.

The iPhone 5’s announcement brought one of the biggest changes in years for the iPhone; the removal of the classic Apple 30 pin dock port at the bottom, with Apple changing over to the new reversible Lightning dock connector system.

Where it does leave more room inside the Apple mobile, it has left a raft of old Apple iPod/iPad/iPhone peripherals and accessories sat around like relics of a past age.

With the new 30-pin to Lightning adapter which has been reported to be shipping down in Australia already there should be some hope for Apple fans. The adapter will offer users the ability to just buy the adapter and hopefully not have to replace all their Apple accessories – it’s not confirmed that the iPhone 5 work with everything, unfortunately.

Since the iPhone 5 was released the Lightning to 30-pin adapter has been stated as for release in October and reports from down-under confirm that some of the adapters have started to ship with the accessory due to arrive today (9th October).

Hopefully this means that the UK will be getting the adapter soon as well so we can test out the connectivity with our old iPhone docks and accessories. Especially as, chances are, the soon to be outed iPad mini will also sport the Lightning port.

In the UK the Lightning to 30-pin adapter costs £25 and can be purchased at Apple.com/UK.