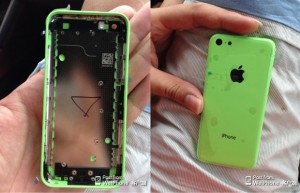 New photos of what could well be the budget iPhone that has been chatted about on the interwebs have appeard on French tech site NoWhereElse.

Moving away from Apple’s usual monochromatic approach to iPhone’s the exteriors of the cheaper iPhone Light appear in green as well as red and yellow – almost equally apple-like but un-Apple-like at the same time, if you follow me.

If these are the cases of the iPhone Light, as some are calling it after blueprints were leaked, this could be the first time Apple has unveiled two different new iPhones at the same time as well as having more than two colours to choose from.

According to leaks, the full-fat iPhone 5S will appear physically unchanged from the current model as usual for the s-versions, and will be built from metal and glass.

Under the exterior, the new iPhone is rumoured to have a beefed-up battery.

The new iPhone 5S and iPhone Light are expected later this year, complete with Apple’s new iOS 7 software on board.

So, plastic or metal? How much cheaper would the iPhone Light have to be for you to buy a plastic iPhone?