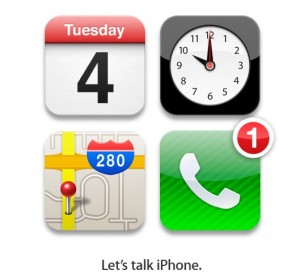 We have all been waiting, guessing and generally pacing up and down like expectant parents but now the iPhone 5‘s arrival date has finally been officially announced.

At 10am Tuesday 4th October the event at Apple HQ in Cupertino will kick off – for those of you sharing this little cluster of islands called the UK that’s 6pm in our money.

There’s no word of a UK event yet so it’s all eyes across the pond!