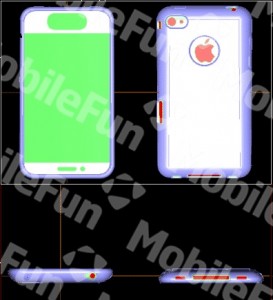 Hello – what’s this then? It looks like plans for cases for the iPhone 5…

Well, that’s what’s being assumed and the design is radically different when compared with the iPhone 4.

So, the flip-flop between iPhone 4S and a whole new iPhone 5 continues with these pictures which are reportedly from a Chinese case manufacturer.

There are a couple of things that have been mentioned before though – most notably the curved back, much like the one which was well loved on the iPhone 3GS. There’s also the much larger edge-to-edge display with almost no bezel around the sides.

What really has me intrigued is the elongated space where the home button usually sits. Rather than the expected circle you get a rounded oblong.

Now, either iPhone 5 will be featuring an extra-wide home button for some curious reason or… that large oval space could be for a tiny multi-touch panel. Hmmmm…. that would be a bit nice wouldn’t it? 😉

The new iPhone will undoubtedly appear with iOS 5, the latest version of the iOS operating system and I’m sure it’s only a matter of time before some coder has poke around and spill the beans regarding this interesting area.

Remember though, as accurate as leaked case plans have been before, this could all be guesswork and a way to drive traffic to a website 😉