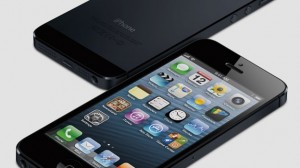 Hot off the virtual press: Apple has just unveiled its taller, 4G-enabled iPhone at the eagerly anticipated event in San Francisco.

There’s been the usual rumours and hearsay but now the iPhone 5 has officially met its adoring public.

Were all the rumours true? Is this another ‘game changer’? Read on Gadgety faithful, read on….

The device’s new size allows it to display an extra row of app icons on its home screen and is 18% thinner and 20% lighter than the iPhone 4S.

The 4-inch screen may be longer than before but the total resolution remains the same at 326 pixels per inch. That does take the total pixel count to 1136×640 thanks to the new iPhone’s 16:9 aspect ratio.

That also means that you can fit a fifth row of icons on the home screen. The good thing about that is that it will cut down on the number of home screens you need to fit all your apps on. You’ll also get a full 5-day week view in the calendar, the calendar shows more events, and all iWork apps will take advantage of the bigger display

Unsurprisingly, the iPhone 5 will work on Everything Everywhere’s (EE) 4G LTE network in the UK. That’s in addition to the current support for GPRS, EDGE, EV-DO, and HSPA data networks. LTE has a single chip for voice and data, a single radio chip, and a “dynamic antenna” that will switch connections between different networks automatically.

The list of carriers which will support the new LTE iPhone 5 are as follows. United States have AT&T, Sprint, and Verizon Wireless – not T-Mobile. In Canada Bell, Telus, Fido, Virgin, and Kudo are in. In Asia the providers will be Softbank, Smartone, Singtel, and SK Telecom. For Australia there’s Telstra, Optus, and Virgin Mobile and in Europe it will go to Deutsche Telekom and EE. If your carrier lacks LTE the iPhone 5 will run on dual band 3.5G HDPA+.

Under the hood the iPhone 5 is packing the latest A6 chip, which is twice faster than the current A5 chip. Graphics perform faster too. The clever thing is that all this swiftness is done on a chip which is 22% smaller than the A5. According to Apple’s specs, users will see Web pages load 2.1 times faster and the Music app with songs will load 1.9 times faster.

The rear camera, or “iSight”, remains an 8-megapixel jobby (with the best resolution being 3264×2448 pixels) with a feature list that includes backside illumination, a hybrid IR filter, a five-element lens, and f2.4 aperture.

New features include a dynamic light mode and a self-stitching Panorama mode which will cut out duplicated faces in an image measuring 28MP. The A6 chip packs an image signal processor which brings with it spatial noise reduction and a “smart filter” that produces better low-light performance and captures photos faster.

The front-facing camera is now 720p so that means HD FaceTime. iOS 6 adds the ability to make FaceTime calls over 3G too so Apple is hoping that more people will start using the video calling service.

A BSI sensor with face detection like that on the rear-mounted camera puts the front-facer not that far off the rear. There is also improved video stabilisation, making those all-important high-res video calls over 4G just that little bit sweeter.

Video capture: 1080p/30fps. It wouldn’t be right if the new iPhone didn’t feature at least some sort of 1080p video capability. No surprises then that you get that same HD resolution recording as found in the iPhone 4S.

Apple, as expected, has redesigned its dock connector for the iPhone 5 to bring it up to date with the rest of the phone’s technology. Called Lightning, to go along with Thunderbolt, it is 80% smaller, more durable (apparently) and you can shove it in which ever way you fancy.

Apple has naturally announced an adapter for the 30-pin connector to use it with the 8 pin, so accessories shouldn’t be defunct but there was no mention of how much this adapter (one clip on and one cabled) will cost.

As well as dropping YouTube there’s a new version of the Maps app produced by Apple – not Google. The new app features such niceties as turn-by-turn direction (supported by TomTom), fly-overs, easy camera-angle changes, and 3D buildings. It looks very nice.

You can now post to Facebook or tweet directly from the Notification Center, web pages in Safari can now be displayed in full-screen mode, and browser tabs can be shared among your devices over iCloud. Mail now includes the VIP feature found in Mountain Lion, which lets you elevate chosen message-senders to special status, separating their message from those less urgent. Having mail ‘favourites’ will certainly be something that I’ll find useful, that’s for sure!

Forstall also demoed iOS 6’s Passbook app, which allows you to keep all your gig tickets, movie passes, coupons, airline boarding passes, and the like in one app. One “cool thing” about Passbook, he said, is that even if your phone is in lock mode, a time-sensitive item such as your boarding pass will appear on the lock screen so TSA can scan it whithout you needing to juggle everything.

Siri has been upgraded to better serve you, adding intelligence on sports, the ability to launch apps with voice commands, provide movie info and listings, make restaurant reservations, and post to Facebook. Hands up who else thinks that being able to update your status by ranting at your phone is asking for drunken trouble! 😉

In addition to launching the new model, Apple will continue to ship versions of the iPhone 4S and the iPhone 4, but is phasing out 2009’s iPhone 3GS.

The new iPhone also comes with the new and natty looking Earpods (see gallery below).

The iPhone was not the only Apple product to be refreshed. The firm’s iTunes media player and store for Macs and PCs has been redesigned, and there were also new iPods.

iPhone 5 will be available through the carriers Everything Everywhere, Orange, O2, T-Mobile, Vodafone, 3 and selected Apple Authorised Resellers.