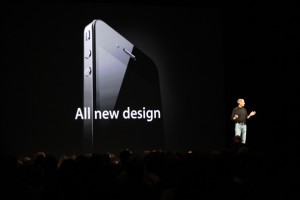 Apple has gone official (as if it could do otherwise) with iPhone 4.

It looks just like we’ve seen although Stevie J insists that we “… gotta see this in person. Glass on the front and back, and steel around the sides. It’s like a beautiful old Leica camera.”

Looks aint everything though right?

Around the rear is the new and improved camera which is the much rumoured 5 megapixel number. Apparently this new snapper utilises something called a backside illuminated sensor – that just sounds a bit rude to me. Anyhooo the 5MP camera is married to a 5x digital zoom which is built into the camera app. Just tap to focus. There’s an LED flash to illuminate your more overcast and dark moments and you can also record HD video at 720p @ 30 frames per second!

There’s also that front facing camera which is used for FaceTime – the Wi-Fi video calling we all hoped for; and it looked pretty smooth. Apparently it has to be over Wi-Fi until the phone companies catch up. If you’re grabbing FaceTime with another iPhone 4 owner there’s no set-up involved.

The new and spanky 3.5 inch IPS high resolution display seems rather good. This little beauty has a 800:1 contrast ratio and a pixel count of 960 x 640 which is four times greater than the 3GS. Apple has named this a “Retina Display.” It’s rated at 326ppi, which Apple claims is beyond the human eye’s limit of distinction.

iPhone OS 4 has been renamed iOS 4 and applications automatically get a high res upgrade. You also now get the choice of 3 web search engines: As well as Google and Yahoo, Bing now joins the team.

Multitasking is present as are the unified mail boxes – again we already knew about those yeah? 😉

iPhone 4 gets six axis motion control thanks to the inclusion of a new gyroscope which joins the accelerometer, compass, proximity sensor and ambient light sensor.

iMovie for iPhone looks fun to play with as once you’ve shot some HD video you get to edit your handiwork right there on your iPhone – the app is priced at $4.99.

iBooks has also made the jump to iPhone and if someone emails you a PDF you can sling that on to your iBook shelf to read when you want. Once you’ve bought an iBook you can sync it to your iPad, iPhone and iPod Touch without paying for it again (which only seems right to me) and you can start your book on the iPad, save where you’ve got to and then continue from the same bookmark on your iPhone. Fabby!

Pre-ordering starts on June 15th (my birthday being the 16th by-the-way) and it’s on sale June 24th in the US, France, Germany, UK and Japan with 18 more countries following in July.

Apple will also be selling a first party case which is like a colourful bumper and a dock – both of those will cost $29 each.