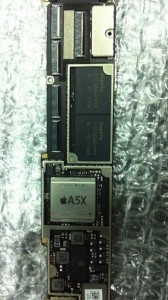 There’s less than three weeks to go before we know what the iPad 3 is packing for sure, but the last few days have been chock-a-block with fresh rumours and hearsay regarding the spec of the next gen tablet.

Apple’s iPad 3 looks to be retaining the 9.7-inch form factor from the original iPad and existing iPad 2 devices with the much mooted Retina display making a premature appearance on the interwebs. It even allowed its peeper pleasing 2048 x 1536p resolution to be measured.

There has also been reports that the fruity tablet will be loaded with a larger rear camera lens and sashay about in a slightly tweaked case.

Under the hood, however, the reports of quad-core lovliness may prove to be premature.

Apple Daily over in Taiwan has obtained photographs through “special channels” which clearly show the differences up against the previous generation devices.

The report points out that the iPad 3 will be carrying an 8-megapixel camera – the same as the snapper on the iPhone 4S.

They also report that the casing is more “beveled” in order to accommodate a larger battery.

Seeing as the iPad 2 has been running along with its a dual-core A5 chip it was generally thought that Apple’s next edition would bump the processor up to a natty A6 quad-core number.

The latest word on the street seems to rebuff that common thought as images of what is being touted as the iPad 3s new innards shows it sporting an improved A5X CPU.

The A5X would hand the tablet improved performance over the current 1GHz dual-core but unlikely to spark the same enthusiasm that the A6 has provoked.

So, that’s some more stuff to add to the rumour round-up 😉