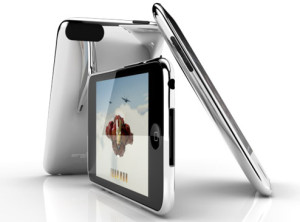 There has been plenty of chat about a tablet-style device from Apple for a number of years.

It has actually got to the point that people were fed up of waiting so they ended up making and selling one and called it the ModBook!

But Christmas 2009 could finally see a fully legit Apple tablet:Â  The iPad.

Ok, we now have our feet firmly planted in Rumourville, Hypetown and Hearsay City but those folks over at TechCrunch claim that:

‘three independent sources close to Apple’ have confirmed details of a prototype device to them.

From what I gather this iPad is likely to be a large-sized iPod Touch sporting either a 7 inch or 9 inch screen.

It will obviously have access to the iTunes app store with iTunes and a Safari web browser.

TC also add that prototypes have been ‘handled’ by those sources and that Apple is now in discussions in Asia about mass production.

Still, TechCrunch doesn’t say this is an absolutely guaranteed happening:

As with all rumored Apple products, we’ll see it when we see it, probably 12 hours before it’s actually announced (if it ever is) courtesy of Mr/Miss/Mrs Blurry Cam.

So, for now, file this under ‘believe it when I see it’ and wait for those ‘spy shots’.