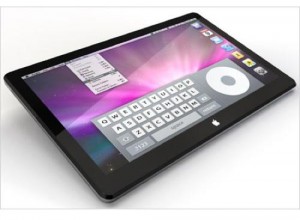 AppleInsider has a great reputation for ‘predicting’ what the next move of Apple will be.

AI has added more creedence to the iPad Apple Tablet rumour-mill because they’ve posted a report online suggesting that weâ€™re almost certainly going to see a Mac tablet within the coming year – as early as Spring!

Ok, so that’s later than the October date I’ve previously reported but it looks like there’s more chance of this thing actually become a reality doesn’t it?

The report says â€œThe 10-inch, 3G-enabled tablet, akin to a jumbo iPod touch, is the latest brainchild of chief executive Steve Jobs.â€ It goes on to say that Jobs has â€œcemented the device in the company’s 2010 roadmap, where it’s being positioned for a first quarter launch, according to people well-respected by AppleInsider for their striking accuracy in Apple’s internal affairs.”

Well, I’m taking this as another rumour but from a trusted source that has a credible score when it comes to Apple products but I’d still be happier with pics of the product or even a leaked spec list….

So – anybody with that info just drop me a line yeah?  😉