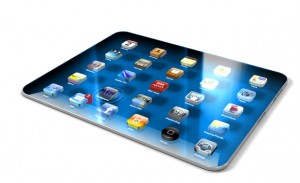 I am sure that you’ve been getting the buzz regarding the next gen iPad and, over the months, there’s been plenty of rumours and outright silliness being passed around. Here’s a collection of the most probable pointers to what iPad 3 will be made of.

The main thing people are asking is whether or not iPad 3 will be packing a Retina Display. Well, there have been reports that Apple and its supply partners are having problems with producing the next generation iPad screen. Apparently, Samsung, LG and Sharp are able to produce a display with a 2048 x 1536 resolution – which is double that of the iPad 2. Hoorah!

The drawback is that half of the screens produced are faulty in one way or another, or, to use tech terms – have poor yield rates.

The other slight drawback is with the resolution itself. 2048 x 1536 is mighty impressive, and beyond any other tablet currently on the market but the pixel density can’t truly be considered a Retina display if judged by Apple’s own terminology. You see, an ‘official’ Retina display has to have a pixel density of at least 300 ppi (pixels per inch), whereas the above screen will manage a ppi rating of 254.

It’s all very well having a spanky screen but word is that this doozy of a display could mean extra girth on the iPad 3. It’s believed that the dual-bar LED backlight needed to make those colours pop would add bulk to the device, which runs contrary to Apple’s aim to make its devices ever-thinner.

However, a rumoured new deal between Apple and Sharp – whereby Apple is spending up to a billion dollars on its own equipment for a dedicated Sharp screen factory – has apparently provided a new way forward for Apple devices. A new screen technology could provide a true 9.7-inch Retina display with no size or weight penalties.

According to Jefferies & Co analyst Peter Misek (courtesy of Forbes), the two companies have produced “a modified IGZO  (indium, gallium and zinc) technology to achieve 330 dpi [or ppi], which is sufficient for an HD display while not using IPS nor having to include dual-bar LED backlighting”. All-in-all this would mean that “the device can be thinner, battery life should be  longer, and the overall experience for users should be meaningfully improved”.

Fantastic then. Well, it’s very doubtful that this will be in place for iPad 3 as there’s strong reason to suspect that production is already well under way. I’d expect a slightly chunkier iPad this time featuring a very bright and rich display with the supermodel version appearing with iPad 4 in 2013.

Update Feb 20: Apple’s iPad 3 looks to be retaining the 9.7-inch form factor from the original iPad and existing iPad 2 devices with the much mooted Retina display making a premature appearance on the interwebs. It even allowed its peeper pleasing 2048 x 1536p resolution to be measured.

I am still holding out for the iPad 3 to be constructed from carbon fibre. This would offset the extra depth and still make the new tablet sexy. Apple even employed a specialist engineer remember? 😉

Update Feb 20: Apple Daily over in Taiwan has obtained photographs through “special channels” which clearly show the differences up against the previous generation devices. They report that the case is “beveled” in order to accommodate a larger battery.

Apple seems to be digging NFC tech and, going by one very interesting rumour, the iPhone 5 will use NFC to take over nearby Macs, enabling you to use your data and settings with a flick of the wrist!

The iPad 3 will have more storage

The iPad 2 appeared with the now familiar 16/32/64GB storage options but, as the iPhone 4S dropped with a 64GB option and flash storage comming down in price, I reckon it’s fairly safe to assume that there may be a 128GB option appearing with iPad 3. That would be pretty cool wouldn’t it?

You know the score – Quad Core!

iPhone 4S arrived sporting the dual-core A5 processor and it zings along very nicely thank you. That’s the chip in the iPad 2 – so, it stands to reason that if the A5 is now deemed ok to power the Apple phone then the more potent iPad should be rocking the next chip up doesn’t it? Quad-core A6 would be very fine and dandy methinks 🙂

Update Feb 20: The latest word on the street seems to rebuff that common thought as images of what is being touted as the iPad 3s new innards shows it sporting an improved A5X CPU.

Photos of an alleged iPad 3 case are reported to prove that the new tablet will inherit the snapper from iPhone 4S.

Righty, neither of the previous iPads have sported a USB port even though many think that would be kinda handy to have. Apple does seem pleased with their Thunderbolt port which appeared on the 2011 iMac, MacBook Pro and MacBook Air. Even Acer and Asus have joined the Thunderbolt party. The speedy accessory/display connector is multipurpose, unobtrusive and Appley – so why not?

It would be wise to hit the next-gen iPad with next-gen connectivity. CNet, for one, cetainly thinks that the new iPad may feature Qualcomm’s 4G LTE Gobi 4000 chip.

So then. The iPad 3 will be a 10-incher with a screen resolution of 2048 x 1536px meaning it will almost have a Retina Display 291ppi. A quad-core A6 processor should be under the hood with that 4G LTE Gobi 4000 and some NFC tech. It might be more ‘cuddly’ than the iPad 2 in order to house the dual light bars that will make it shine. But that will also give more space for roomier 128GB of flash storage inside and a Thunderbolt port outside of its carbon fibre body.

Have you anything to add to the list or disagree with something above? Let me know!