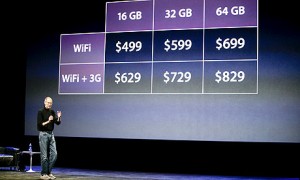 One good thing that has come out of the latest Apple announcement (you may be aware that something called the iPad was unveiled on Wednesday) is that it seems to have ruffled some feathers.

DigiTimes is saying that the likes of ASUS and MSI were expecting the new Apple to come in at around $1,000 and so were cunningly planning to undercut the iPad by around 20 to 30%.

Stevie J has somewhat dampened their touchpaper by slipping out a base model at $499 which is effectively the price of worthwhile netbook.

This leaves the other companies having to compete with Apple and its iPad with specification and looks (but most people know that Apple design is quite special) as well as price.

To me the low entry price to get your iPad is significant as it seems Apple knows that it has to do something clever in order to woo people towards the shiny iPad. For all intents and purposes the punters will need to be convinced that there’s a market for this self-confessed in-betweener.

Honestly, I can’t see Apple making much, if anything, on the base model iPad.

Apple will be pulling some basic marketing tricks in order to cover the cost. The obvious one is that to get the ‘decent’ models with 3G and/or more memory you’re gonna need to lay down more of your hard-earned. We all know geeks might sneer at the owners of the ‘basic’ model so Apple will be hoping that most will at least aim mid-range. At the end of the day the folks buying the higher-end models will be covering the cost of the more lowly model’s discount.

Apple’s favourite move, as well as getting you to pay an extra $130 (and possible the same amount in Â£’s) for 3G is that you need to buy nice little Appley add-ons.

Did anyone else notice the lack of USB ports and SD card slots? Both of those omissions will eventually save the company millions and coupled with the sale of white plastic USB and SD card adapters will add cash from retail – this means a double win for Apple.

Add to that revenue made from the new iBook application and store and the other stuff in Apples portfolio it all makes sense.

It’s just going to be interesting to see what Microsoft, Asus and the rest come up with now.

Keep coming back and we can all find out together 🙂