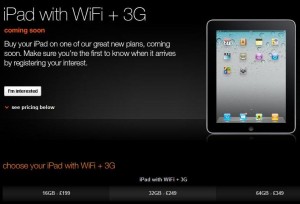 Well, even at its regular price, I’m pretty certain that the iPad will be featuring on many a letter to Santa this Christmas.

Orange and T-Mobile (both now part of the same Everything Everywhere group) have just announced their subsidised Apple tablet deals so you or Father Christmas don’t have to slap down the full asking price on day one.

A 16GB iPad with Wi-Fi and 3G is available for Â£199, on a two-year deal at Â£25 per month for existing Orange and T-Mobile customers.

In that two-year tie-in you get 1GB of anytime data per month, and 1GB of what they term as ‘quiet time’ data – basically any web use between midnight and 4pm. You also get ‘unlimited’ BT Openzone Wi-Fi, which is subject to 3GB fair usage.

Before you start writing in – obviously once you’ve signed up to a SIM-only contact with a provider after buying an iPad straight out things start to level out again. The thing is you’ll get more flexibility from the SIM only data plans and, chances are, you’ll not be cuffed to a 2-year deal.

Now, with the whispers of an iPad 2 due to appear on the horizon would it be prudent to sign into a two-year contract

Perhaps wait to see what O2 and Vodafone say in reply 😉