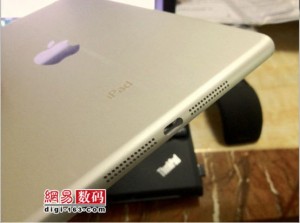 Images of a back cover apparently belonging to the new iPad mini have appeared and gives sight of where everything will live.

The leaked pictures gives a clear view of where the various ports, power button and volume keys will be sited.

One of the images shows the empty casing sitting on top of a standard iPad, which gives a great indication of scale between the familiar sized Apple tablet and the new 7.85-inch mini version.

There is also a loving close-up of the smaller dock Apple is rumoured to be including in all future iOS devices.

What is interesting is that both the camera and the headphone port seem to remain in the usual place and not moved as suggested in other rumours. These have the camera placed centrally whereas the headphone socket was said to move down to live with the new dock connector as with the rumoured new iPhone 5 design.

Well, judging by the event invitation, Apple will probably launch this bit of kit separately to the iPhone 5 so we’ll all know more in October.