Apple iPad Lowdown – Would I Buy One? 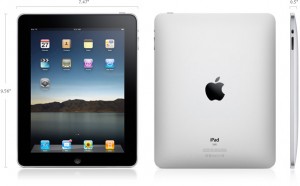 Ok, if it hadn’t been for the site borkage I would’ve posted a breaking news item about the new Apple iPad.

As it is, now the excitement of the event has ebbed away, I shall write up a breakdown of the new handheld and try to look at the new tablet a bit more……. evenly.

Righty, this new iPad is said to slip in the gap between mobile phone and laptop – iPhone and MacBook if you prefer.

The specs measure up pretty decently – the “custom-made” Apple A4 processor has been clocked at 1GHz. About that “custom” bit – Engadget reports that it’s actually an ARM-built Cortex-A9 MPCore CPU.

Equally important to the processor is the screen – On the iPad you get a 9.7 inch number with a 1,024×768 res. Now, I was lead to believe that the iPad would be a HD dream but as it isn’t 16:9, black bars will appear around your film and thus reducing the vertical number of pixels to below that important 720 count.

The iPad does offer a variety of options to suit the user’s budgets though as it comes in either 16GB, 32GB or 64GB flavours – with or without 3G. The addition of 3G will add $130 onto the price by-the-way – there’s no UK pricing yet either. All versions are, of course, WiFi loaded 🙂

Apple reckons you’ll squeeze out about 10 hours of Web surfing, or a month on standby – that sounds almost unbelievable given the iPhone’s battery life. Oh, those that were hoping for a removable battery – you must be joking! Hello, this is Apple here 😉

Thankfully all of your iPhone / iPod Touch apps will work on the iPad, at the same size as the iPhone or doubled in size. Some apps are already being optimised for the iPad, with higher-quality graphics and clever use of the extra screen size.

Something I was expecting from this oversized iPhone was multitasking and Flash support. I got neither! No. Even the lowliest netbook will allow you to watch a YouTube clip whilst browsing Facebook and chatting on Twitter – unfortunately the iPad is lumbered with a phone’s OS and it also seems that Steve and Co are still unwilling to play nice with Flash.

Let’s get a positive now – iBook. Yup, as we all assumed, Apple has introduced its own ebook store and app. I have to admit that it looks rather nice -although this is another omission from the UK store at the mo. Pages can be turned by moving your finger across the screen, like a real book (or the free Stanza iPhone app), but you get a lovely, realistic page-turning animation. Some reckon that staring at the iPad’s LED-backlit LCD screen will be a little hard on your eyes. I’m guessing that’s why other eReaders use E Ink screens.

You’re also able to see all of your email attachments as the iPad supports .jpg, .tiff, .gif and PDFs. You can view Microsoft files (.doc, .docx, .ppt, .pptx, .xls and .xlsx). Rich-text format and .vcf contact information is also viewable.

Whilst I’m chatting about compatible formats, video-wise the iPad plays H.264 video encoded at up to 720p at 30 frames per second, MPEG-4 video up to 640×480 pixels, and .mov file formats. It will play YouTube videos, but (as mentioned before) it doesn’t support Flash, DivX or .avi.

As for tunes – Not surprisingly iTunes is built-in and play AAC, MP3, MP3 VBR, Audible (formats 2, 3 and 4), Apple Lossless, AIFF and WAV. Thankfully iTunes is able to run at the same time as other apps, meaning you can listen while you surf. The iPad sports a 3.5mm headphone jack.

I was asked if you’ll be able to slip in your O2 SIM to get 3G, unfortunately the iPad uses a different type of SIM card: the 3FF, or Micro SIM. It’s about half the size of a regular SIM. This means you won’t be able to import a 3G iPad and use it with a UK data SIM until our networks start providing Micro SIMs – sorry Adam.

On the subject of phones – That 3G connection only allows you to connect to the Internet and not make calls. You can, however, make VoIP calls on the iPhone via Wi-Fi and 3G using apps so you can also use these apps to turn your iPod touch into a phone – hopefully this should still work on the iPad.

For navigation the 3G version has GPS and a digital compass. The non-3G version will be location-aware because of its Wi-Fi connection.

If you fancy hooking up your camera you’ll need the camera-connection kit. This includes a USB input and SD card reader that attach to the end of the cable that comes with the iPad.

As for add-ons I’m liking the keyboard dock a lot! Check it out in the gallery.

It’s looking like it’ll be out in the UK around March/April for the Wi-Fi-only model. The 3G version hits the US in April, and Steve Jobs announced from the stage that international versions would follow nearer June when network deals are struck.

Personally I’d hold out til the new iPhone and then decide what you need. The iPad is pretty much a large iPod Touch (not even an iPhone). Ok, iWorks is handy, the games look good on it and it will be easier to slip out than a laptop and if you’re on the road a lot it may make some sense. Truthfully though – I get a lot out of my iPhone and I can call and text people on that!

I’m not saying that I’d turn one down – but also I haven’t got the gadgety lust for it either. Perhaps that might change after a hands-on.

Could it be that I was expecting something more from this? After all, it is what we all guessed it would be isn’t it?

What do you think? Are you going to buy one? What helped make that decision?