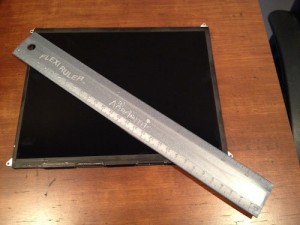 Don’t you just love it when an exciting rumour comes true? Here is an honest to goodness iPad 3 display and it’s officially twice better than the one fitted on the iPad 2!

That’s right folks – all the rumours that the next generation of Apple tablets will be fitted with a spanky new screen are true.

The folks over at MacRumours have had their paws all over the iPad 3 screen and taken their measuring devices to it and discovered that the new slate will have impressive detail.

The display on the Apple iPad 3 will have an eyeball pleasing resolution of 2048×1536 – double that of the iPad 2’s screen.

The 9.7-inch iPad 3 screen was placed under a microscope and was found to pack in 16 pixels in comparison to the iPad 2’s 4 pixels in the same measured area.

This means that the iPad 3’s screen will measure in at 263.8ppi. OK, so that’s not quite as high as the iPhone 4/4S’s 326ppi but it is still enough to warrant a ‘retina display’ label.

The extra resolution will result in super sharp images and the inability to distinguish between different pixels with the naked eye.

Combine that with a quad-core A6 processor and other bits of loveliness under the hood and the next gen fruity tablet will be a thing of gadgety goodness and no mistake.

The iPad 3 is rumoured to appear on March 7.