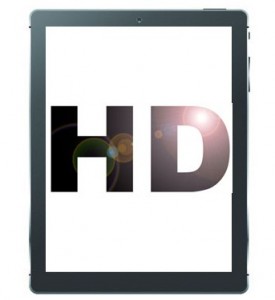 I had heard whispers on the interweblogosphere that Apple may be ditching the numbering system for their latest iPad and, instead of being iPad 3, it would be called iPad HD. There’s more to back this up now.

Just when you get comfortable with naming schemes, no matter how daft they are (yes, Google Android – I am looking at you!) it sounds as though Apple may be kicking out the iPad 3 name in favour of iPad HD.

The typically shady “unnamed sources” have told a couple of trusted sites that the iPad 3 will, in fact, be called the iPad HD.

Apparently there are usage reports on web forum app Tapatalk that corroborate the iPad HD name – and this is supposed to be practically impossible to fool.

There are a few iPad HD domains that have already been snapped up, but nobody is admitting that they’ve been approached by Apple at the time of this article.

This doesn’t mean that the new iPad wont be called iPad HD – it just means that Apple aren’t in ownership of these URLs at the moment.

The iPad HD would live up to its name though as it’s reportedly equipped with a 1080p-trouncing 2048×1536 Retina Display.

Perhaps there will be an iPad HD and an iPad 3? Perhaps all of this is just Apple whipping up more interested?