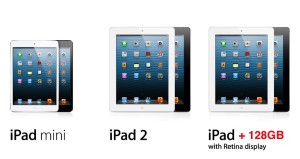 It’s been a while since there’s been any Apple-flavoured rumours but there’s word that a new iPad model is in the works.

Before owners of the iPad 4 get in a similar rage to those iPad 3 owners when the 4 dropped a matter of months after they’d bought their third gen model – It’s not a brand new device.

The rumoured Newer iPad is a new SKU in the fourth generation iPad with Retina Display lineup and, according to 9to5Mac’s source, will be offered in both black and white, with both Wi-Fi and cellular options.

The new model will join the existing line-up rather than replace any.

The shadowy source didn’t actually fess-up that the storage capacity would be the new feature but, thanks to evidence in iOS 6.1, there already appears that a 128GB iPad is in the works.

One line of thinking is that the new iPad could be aimed at education and government customers as the loose-lipped insider said it will be available in special 10-packs for educational institutions, but the higher capacity device theory makes sense for a number of reasons beyond just evidence found in software code.

Personally, I reckon boosting the memory on the full-sized Apple tablet would create a more definite niche between it and the iPad Mini.

The only downside I can predict is that this would give the iPad range a higher top price as I could never see Apple dropping the price of the current range in order to make room for the new kid.