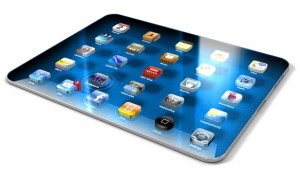 It may be worth saving any money you get this Christmas as word has it that the Apple iPad 3 will be here around March or April!

The next generation iPad should be here in the next few months because component manufacturers have started delivering parts for the latest Apple tablet to equipment manufacturers.

We have already seen that the iPad 3 has been confirmed thanks to code hidden in the latest version of the iOS operating system.

As Foxconn upscales iPad 3 production it is normal to see production of the current model be cut to the tune from 14-15 million at the end of the year to 4-5 million in the first quarter of 2012.

In comparison the number of iPad 3 models being made at the start of 2012 will be around 9.5-9.8 million. It is expected that sales of all iPad products will reach 40 million by the end of 2011, up from 25.06 million in the first three quarters of the year. That’s some impressive figures right there.