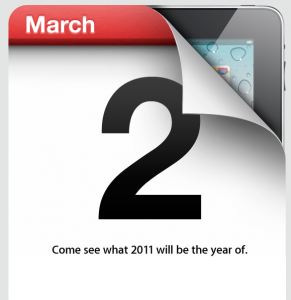 Moving away from new Apple MacBook Pro rumours for a second – Apple has finally officially announced that a certain media event will be taking place at 10am Pacific Time on March 2.

The event will be held at Apple’s favourite venue, the Yerba Buena Center for the Arts in San Francisco.

The invite itself doesn’t really give any decent hints at what the event is about but look at the graphic – it is screaming out iPad 2!

This confirms all the rumours that actually stated this date quite a while back and now it’ll soon be time to “Come see what 2011 will be the year of“.

This also makes sense of the rumour that production lines have already been churning out vast numbers of the iPad 2.

Seeing as, traditionally, Apple has held March/April events as iOS previews it has been hotly tipped that Apple might do an iPad and iOS combo at this one.