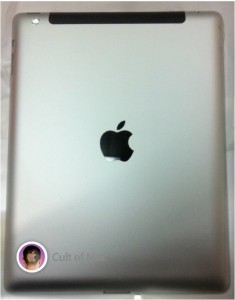 Leaked pictures of the Apple iPad 3 have been spotted on the interwebs. The sneaky snaps show internal components of Apple’s third-generation iPad as well as the case design.

The images have been shared by iPatch, a leading iPod/iPad/iPhone repair specialist here in the U.K. and they show various bits and pieces that go together to make the iPad 3.

The exciting thing is that most of the components are different to the ones used in the previous two models of Apple’s tablet.

Disappointingly though, it does appear that Apple hasn’t given the external design a refresh.

The biggest changes seem to be happening with the Wi-Fi components and the iPad’s headphone jack.

The latter seems to have another connector on its bottom end. iPatch believes this connector is for a dock connector, which would suggest that the iPad 3’s headphone jack will be at the bottom, alongside the dock connector, similar to the iPod touch.

The thing is though, the images the new iPad’s rear panel conflict with that theory.

These images strengthen reports that claim the iPad 3 will boast the same design as its predecessor, but with improved internals. No word about the better than HD Retina Display though.

The third-generation device is expected to be an “incremental” upgrade, much like the iPhone 4S is to the iPhone 4, with Apple’s A6 quad-core processor, a Retina display, and a better rear-facing camera.

Check out more pictures below and over at Cult of Mac.