Apple iPad Apps in UK iTunes Store – Priced and Numbered (some, Like the Marvel Comic Reader are FREE!) 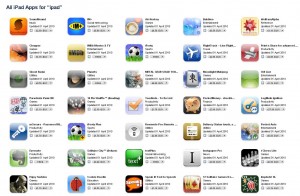 Now the UK can glimpse the iPad Apps in the iTunes UK Store and check out the prices – even though we’ve only a leaked date and no official pricing for the iPad as yet.

Apple has started filling the iTunes App Store with iPad Apps in preparation of the US iPad launch which happens on Saturday.

After a little lateral thinking I decided to follow a certain Mr Fry’s iPad list which takes you to a brave new world called ‘iPad Apps’.

Be prepared for apps that you currently have running on your iPhone to start getting updates because of the iPad upgrades. Once updated theyâ€™ll be shifted along to a new area called iPhone, iPod Touch and iPad apps.

Lots of new apps added also have iPhone support like the groovy Marvel Comics Viewer. This free app allows you to download issues of Spiderman and the rest for Â£1.19 a pop there’s even five free ‘comics’ to start you off 🙂

At the time of publishing, there 16 pages of iPad apps up for sale in the UK iTunes App Store. I was pleasantly surprised to see that quite a few were reasonably priced and a fare few are even free!