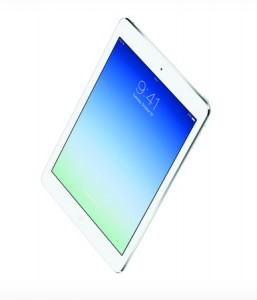 How time flies. It was just three years ago when Apple unveiled the original iPad. Looking at the 1st gen Apple tablet now compared to what’s just been released. Wow!

The fifth generation iPad has just been introduced to the world – welcome the iPad Air.

The new iPad has had the first major remodel since the iPad 2. The new iPad sports the same 9.7-inch display as all of its predecessors, but with an updated shape following the design language of the iPad mini.

It weighs in at just one pound, making it the lightest full size tablet in the world. It’s 0.4 lbs lighter than previous generations.

The bezel is 43% thinner on the sides. Not only that but the edges of the device are tapered in the same way as the iPad mini’s dramatic curves along the sides. No longer the gradual slope of older iPads.

I wonder how big a leap all of this is from the last, fourth generation iPad, though. I am guessing it would sound a lot less impressive but still probably a move forward. You notice there’s no TouchID either.

The new processor is also accompanied by that M7 motion co-processor that was used in the iPhone 5s, which focuses on computing information generated from the sensors to make the device smarter all around.

The new A7 processor runs on a 64-bit architecture, like all the new Apple products, with more than 1 billion transistors. Apple also tossed in MIMO technology to help with reliable Wifi, and all that with 10 hours of battery life, according to Apple.

The iPad Air has even had its camera tweaked as Apple has decided to pay a little more attention to the iPad camera this time around. It is equipped with an updated 5-megapixel iSight camera, with 1080p FaceTime camera in the front and dual-mics for video chat.

The iPad Air will be available in silver and white and space grey and black colour options starting at $499 in dozens of countries on November 1st. Waddaya know – just in time for the holidays.

An LTE version will be available starting at $629. Apple is also keeping the now relatively ancient iPad 2 in the lineup for $399. All of the new iPads will be shipping with iOS 7.