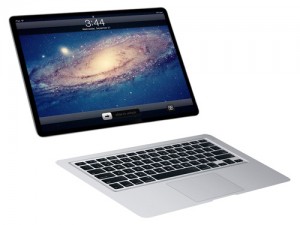 The Apple iPad Air. There, I’ve said it. You’ve heard of the MacBook Air and you must be aware of the little tablet known as iPad; but there’s a good chance that Apple will be moving in on Asus Transformer Prime territory.

Obviously there has been no confirmation of this you know – Apple being Apple – but after they recently snaffled their own flash memory company it could be all part of their game plan.

There are rumours aplenty surrounding the iPad 3 and its supposed 1048×1536 Retina Display which we may see in March. More recently this high resolution screenage has also been tipped to appear on the new MacBook Pro which could end up boasting a full on 2880×1800 bad-boy!

But with news of a more powerful MacBook Air on the way could that nudge out the need for a seperate MacBook Pro line? Add in the fact that Apple has bought a flash memory company – this could further support the A’s goal of extending flash memory and doing away with spinning drives (and the MacBook Pro) altogether.

Could this also be the moment that Apple’s carbon fibre engineer has been waiting for? What better chance to weave his magic with lightweight but strong materials? As well as creating the bodyshell for a new iPad his team could spin a lightweight keybard too! With the potent power of the quad-core A6 chip coming to the new iPad 3 could the Air’s days be numbered too?

All-in-all the new iPad Air could combine the portablitly of the iPad, the power of a Macbook Pro and keyboard touting lightweightness of a MacBook Air.

Granted, Apple already has plenty of irons in the fire but looking at the power of convergence (when was the last time you took out a phone, a music player, a gaming device and a compact camera and not just a smartphone that could do the lot?) then it could look like the next logical step. The Asus Transformer Prime is showing how good this could be and I am sure that the world would welcome an iOS powered device. Let’s face it ClammCase and ZaggMate, et al are already cobbling together keyboard docks for the iPad so why not an Apple one that would extend the iPad’s battery-life and perhaps add in some extra processing/graphics juice?