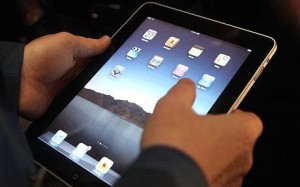 That’s right my gadgety friends. A mere 28 days after its initial release Apple have announced that the iPad has crushed the iPhones sales figures which took a long (in comparison) stroll of 74 days to hit the magic million.

The iPad sales figures were boosted even further by another 300,000 after the release of the 3G edition seven days ago.

The App Store has also seen 12 million downloads so far and the iPad now has 5,000 dedicated apps to take advantage of its enlarged screen size.