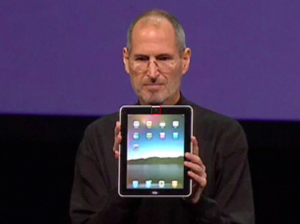 It seems that iPad 2 has already made its way to the advanced testing stage and the benchmark of the slate world will be bouncing out with a front-facing camera and FaceTime skills this time just to keep ahead of the game.

Well, this is what a certain tell-tale told AppleInsider who is apparently â€œa person with proven knowledge of Appleâ€™s future product plans.â€

The upshot is that the new version iPad could even appear before Christmas (well, word is that’s the internal deadline) which means, even if that date slips, it could still be on the shelves for Q1 2011!

All this would neatly fall in line with the release of iOS 4.2, which happens to be being built with the iPad in mind.

Add into this cake mix that Steve J himself let slip that HDR photos would be part of iOS 4.2 on the iPad (watch the vid below) at the recent iPod bash. Hmmmmmm…… surely for HDR photography you need at least one camera? 😉

So, iPad 2? Will you be (sorry) upgrading or if you skipped v1 are you going to allow yourself to be tempted by v2?