Apple iPad 2 Spotted at CES 2011 – Photographed in the Wild 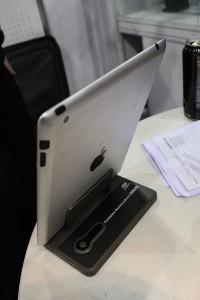 Apple doesn’t generally take a road trip to Vegas but that doesn’t mean that the new iPad didn’t fancy a journey to the desert.

OK so the iPad 2’s are shells but these mock-ups used to show off cases and stands designed for the slate’s sequel.

These tech mannequins dotted about CES 2011 all seem to agree with the common rumours around the interweblogosphere.

The iPad 2 will have a flatter body which features a rear-facing camera and a larger speaker grill.