Apple iPad 2 Being Churned out Ahead of April Launch 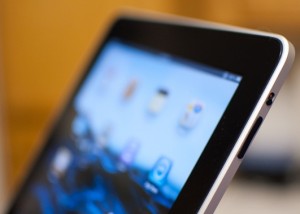 Well, it seems like iPad 2 has started rolling off production lines ready for its unveiling in a month or so.

It seems that Apple’s next-gen tablet will be slimmer and lighter than version one – all according to a Wall Street Journal report.

The exposÃ© was co-written by Apple’s go to reporter for planned leaks – Yukari Iwatani Kane. ‘People familiar with the matter’ were quoted as saying:

“The new iPad will be thinner and lighter than the first model, these people said. It will have at least one camera on the front of the device for features like video-conferencing, but the resolution of the display will be similar to the first iPad, these people said. It will also have more memory and a more powerful graphics processor, they said.”

No firm release date has been given but I’m still expecting an April announcement and for the new tablet to cost around the same as the outgoing model.

The mention of “at least one camera” raises the prospect there will not be an additional rear-facing camera on the iPad 2. The front-facing cam has been taken as a given for months but still no real mention of the expected NFC contactless payment functionality.

So – that’s a no to higher resolution but howsabout that anti-glare/smear display?

Are you getting tempted?