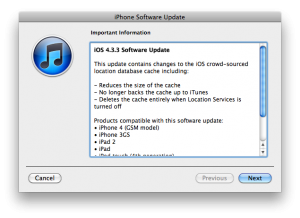 Apple has squirted out the unsurprising addition of the iOS 4.3.3 update which addresses a number of issues brought to light by the iPhone location tracking controversy.

According to the release notes, iOS 4.3.3 reduces the size of the location database cache, stops backing the cache up to iTunes when you connect your device to a computer, and deletes the cache entirely when you turn Location Services off.

The update may help you go about your business a little freer once more now that you know youâ€™re not being watched by Appleâ€™s beady eye – but remember that the fruity tech giant made it clear that itâ€™s not tracking users and that the data is not transmitted back to Apple!

The company said it uses the cell tower and WiFi hotspot information to help determine your location when using GPS, among other things. Still, Apple said iOS’s ability to keep tracking users, even after Location Services was turned off, was a bug, and that a software update would be released soon to fix it.

There was no announcement prior to this update landing so consider it a surprise from Cupertino.

Do bear in mind that the location cache still will sit on your iPhone or iPad even though it’s no longer backed up to the computer. So, if you don’t want folk to know where youâ€™ve been keep your Location Services switched off just in case some bunny boiler decides to jailbreak your iPhone 😉