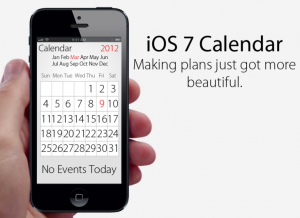 You may have already heard that the next Apple software update was going to feature a ‘flatter’ design and more Jony Ive – apparently iOS 7 will also be packing changes in some of the standard Apple apps.

Jony Ive is overseeing the development of the latest OS refresh and is reportedly shunning “realistic” images and UI elements in favor of a flat UI.

This will obviously give a whole new feel to the Apple phone’s interface but, according to reports, there will also be major changes in line email and the calendar apps.

As well as redesigning the overall aesthetic of the OS, Jony Ive has been exploring new ways for users to interact with their devices.

Ive has apparently “met with makers of gesture technology” to discuss the possibility of adding such features to iOS. The designer is interested in “altering how people control their computers.”.

It was noted that those latter interface changes are not likely to arrive with iOS 7 which I’m expected to be announced at the world wide developer conference next month.