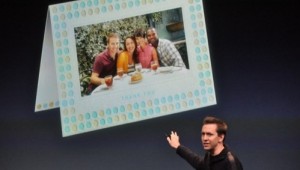 Apple unveiled their new Cards application yesterday at the iPhone 4S event but Touchnote reckons the idea sounds quite familiar.

The new iPhone app will give users the ability to create greetings cards wherever they are and then, once finished, get Apple to print and ship them off to their intended recipient.

You will get to choose from images you want to incorporate on to a selection of pre-made card templates. Where this will no doubt be a handy app to have and means cutting out the likes of Hallmark there is one company wishing to point out that there’s already such a service.

Touchnote, a company I mentioned back in 2008 have responded to Apple’s news in a positive way.

A representative from Touchnote told me that “as #1 mobile cards app – we’re extremely excited about this announcement.  Best of all, Apple has validated that there is a market for “physical photo sharing from mobile”. All other OEMs will follow Apple soon, as they inevitably do. Luckily, we saw it coming: we launched globally with Sony Ericsson already last year”

Here’s a few facts and figures from Touchnote:

You can get Touchnote now on iPhone, Android and via the Web.

Apple Cards is currently a US only application at the moment and will to go live on October 12th with greetings cards shipped within mainland America costing you $2.99 a pop. Shipping outside of the states will hit you for $4.99 a go.

To me Touchnote looks a good deal.

Are you going to give Touchnote a try or will you hold out for the Apple app if/when it comes to the UK?