Apple iOS 7 official – all you need to know 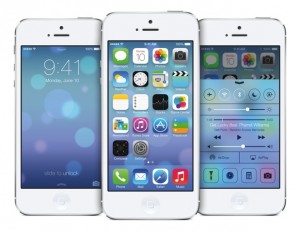 is the most important refresh since the launch of the original iPhone – well, that’s what Apple said.

The operating system comes with a new interface which still will feel familiar.

The main point of this redesign was to make content take advantage of all available screen space. With that, I am taking it that Apple is not planning to enter the super-sized screen arena with the likes of Samsung, HTC and Asus.

The new features in a nut-shell include:

Control Centre comes with access to Airplane Mode, wi-fi, Bluetooth, screen brightness and more. It’s accessible with one upwards swipe from the bottom of the screen.

Notification Centre is available from the lock screen to offer users an overview of their alerts. The new Today feature offers a summary of events for the day ahead, such as meetings and so on.

Camera app features filters with one eye clearly on Instagram. Users will be able to make real-time photo effects and switch between four camera options with a swipe.

Siri has new male and female voices and Twitter search integration, so users can ask what people are saying on the social network. Wikipedia and Bing are also integrated.

This is the biggest change that Apple has brought to the new iOS. From the moment you switch your iPhone on, post update, it should appear as a different phone altogether.

Once you unlock the phone you will be treated to a nice new animation, showing all your apps flowing down onto your home screen. Every stock Apple icon has changed, with a simplified design that unifies the entire look and feel of the new iOS. It’s cleaner, clearer and , dare I say, more sophisticated.

iOS 7’s lock screen has also been given a rethink. Now, when you are asked to enter your pin for security, the digits will appear full screen. On top of this, the familiar black bars and slide to unlock that have become so synonymous with the iPhone are now gone, replaced instead with at-a-glance weather and time.

The lock screen now responds to touch inputs as well, so if you have a live animated background then you will be able to interact with it.

The new keyboard is semi-transparent, letting you see whatever you are viewing below in between each key. It is meant to give context to the rest of the user interface and also helps give the illusion that there is more screen space to play with.

Folders follow the same transparent motif as the keyboard, so they open up over your background like Android does rather than splitting it in half. They also support multiple pages, so you can stick as many apps as you like into one folder.

Notifications are relatively new to iOS but they’ve had a total overhaul with iOS 7. To open the notifications window you slide down from the top of the iPhone, just as you did before, except for this time the window is again semi-transparent.

Inside the new notifications menu you will see the ‘Today’ view, which shows all the relevant information about the current day, including birthdays and weather.

On top of this, notifications now appear in the lock screen and are synced across multiple iOS devices, so if you dismiss one on your iPhone, you won’t see it appearing on your iPad.

The best way to think of Control Centre is like that of the Android control widget. To get hold of control centre all you need to do is swipe up from the bottom of the screen and from there you can set brightness, control music, Wi-Fi, Airplane mode and even activate a flashlight.

Control Centre is openable within any app, including Safari. It is of course transparent. See a theme here?

Multi-tasking came with iOS 4 with select apps, but now it comes with all apps on iOS 7 to try and improve battery life. This means, should you have an app you are using constantly, then iOS 7 learns what you use often and will give that app frequent background activity to keep it up to date for when you need it.

Even more clever is how iOS 7 knows when you have good coverage. It will use moments of decent reception to go and fetch information to the handset. That is clever, admit it.

The multi-tasking menu itself also shows app cards, so that you can see what each app is doing, rather than a small bouncing tray of icons as before.

Think of this like a greatly improved Find My iPhone. If a thief tries to turn off Find My iPhone, or wipes the device entirely, then Activation Lock will stop them from re-activating the device. It manages this because, chances are, the sticky-fingered-phone-nabber won’t know your iCloud username and password.

The weather app is now completely animated, with very stripped back text and an increased emphasis on the animation behind. There’s a hint of old HTC Sense weather with a sprinkling of Yahoo weather about it, with animated storms, falling flurries of snow or drifting clouds.

If you pinch to zoom out, then the app will provide you with a complete overview of every city you have stored, showing you at a glance weather information for each, complete with animations and time.

While not the most exciting application within iOS, the Calendar forms the crux of the design change that it implements. All the paper effects and overly designed UI tweaks have gone, instead being replaced with a simple colour coded interface.

To interact with the new look calendar all you need to do is pinch to zoom in and out, with the app providing you daily detail and the highest level of zoom and monthly when you are furthest out.

While being very similar to the previous iOS, messages in iOS 7 uses a simple blue and grey colour palette which helps to highlight text. The transparent keyboard mentioned earlier also makes an appearance, as does a new iOS gesture that allows you to see more information about an app by swiping left to right.

Do this in messages and the app will open up your received messages list, scroll the opposite way and it will close them back down.

Safari is the most popular mobile browser in the world according to Apple (biased?), but Apple has taken a big risk and given it a total overhaul for iOS 7.

At the top of the Safari browser there is now a Google Instant-style smart search field. From there you can get one tap access to your most browsed sites, via a set of intelligent icons that appear whenever you begin to search.

Type in a search term and Safari will show you a big list of related information, just like Google Instant. Shared links, which have been sent to you via LinkedIn or Twitter, are also viewable from a swipe-out tray that is accessed on the left-hand side of the screen.

Tabs have been reanimated to give a much cleaner and modern look. The limit of 8 tabs has been lifted so you can have as many as you want. If you swipe to the bottom of the tab carousel then you should see all your iCloud tabs. It’s even possible to reorder tabs by just swiping and dragging them. They are closed by swiping them off screen.

This pretty much negates the need for NFC. If you are in an app that supports what Apple calls a “Share Sheet”, then you can open AirDrop from within the app, see who is up for sharing nearby and then send that information straight to them. This can be done system wide, provided the app supports Share Sheet. It’s all done via peer-to-peer Wi-Fi so should be very secure. It will be supported on iPad mini, iPhone 5, 5th gen iPod touch and iPad 4.

As well as a stripped back new look, the camera now works on a swipe left-to-right basis. It incorporates four different cameras into one: a square format option, standard stills, live photo filters and of course video.

The photos app is another area that Apple has given a good seeing to. Instead of leaving you with a big, unorganised Camera Roll, the app now sorts your photos into moments based on timing and locations.

These smart photo albums can then be browsed individually, or if you pinch to zoom out, at a much wider level. From the fully zoomed out screen you can see every image shot on your iPhone grouped via location and time. You can then tap an individual pic to see a preview, or double tap to open it in detail. Photos can of course be edited from straight within the app.

Sharing has also been improved. It now incorporates the likes of AirDrop, Facebook, Twitter, Mail and importantly iCloud. Using iCloud Photo Streams it’s possible to share sets of photos with friends, or have them upload their own pics to your shared group streams.

Siri now boasts a set of new voices and even lets you choose between male and female.

Siri has also got a lot smarter. It can do things like turn on Bluetooth or increase brightness within the phone, as well as control other system level functions. Twitter is now integrated into Siri as is Wikipedia and Bing web search results.

iOS in the car

iOS is set to make a big jump to cars in 2014. The operating system will repeat itself on your car satnav screen, allowing you to use things like maps, messages and music, all eyes free using Siri.

The App Store gets a totally new look. Apps can be searched via location now, so you can see what is popular depending on where you are.

The biggest change though, and this is one we are sure many will have been waiting for, is that it now updates automatically.

Apart from a redesign, Music remains largely unchanged, it’s the iTunes Radio functionality which is the biggest change – more on that later.

As always iCloud songs are integrated into the music app as is album artwork. What has changed is the playback screen itself, which is again much more simple.

When the device is sat on its side there is a nice new cover flow, which loses the black background and instead show a big grid of every album you want to see. Music control is also accessible from the Control Center.

iTunes Radio is built straight into the music app. It combines Spotify with Last.fm to bring Apple’s own twist on unlimited streamed music.

The iTunes Radio home page is all about radio stations. Some are provided by Apple, others you can create yourself. All you need to do is search for an artist and then iTunes Radio will create a station based around them.

Like what you are listening to? Then let iTunes Radio know by favouriting a song, it will then in turn offer more similar content.

If you have iTunes Match, the service is included completely free of charge without adverts. No iTunes Match means you have to deal with adverts.

Which devices will get updated to iOS 7?

As with any major update to the mobile OS, there are a handful of features that won’t be coming to older generation iOS devices. It’s almost like Apple wants you to upgrade, isn’t it?

For starters, iOS 7 will be compatible with the following devices, so anything baked into the OS, like Find My iPhone, will be included:

Now, according to Apple “features are subject to change” and “not all features are available on all devices.”

Here’s what you’re getting and not getting based on each device – in some instances some services will be limited to 10 devices.

When can I get it?