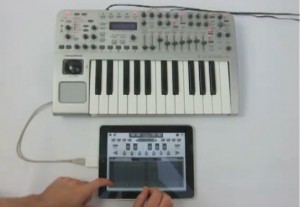 As well as sorting out that pesky alarm bug that had most of us waking up to an alarm an hour too late this week the other great thing to appear in the 4.2 iOS update next week is MIDI support!

The folk over at Create Digital Music have discovered that iOS 4.2 will allow iPads, iPhones, and iPod Touches to support MIDI devices over both USB (via camera connection kit) and Wi-Fi.

The video shows what the 4.2 version of Pianist Pro will be capable of, and put together a handy guide to what we might expect from a world where all out iOS devices can communicate via MIDI, whether through the USB cable or over WiFi.

Apparently M-Audio Uno works with the iPad, and the accelerometer can indeed be used to pitch bend!

Anyone else waiting for an iOS version of Garage Band?