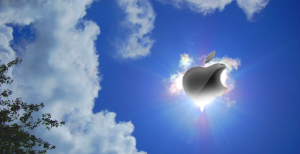 That’s right folks – Apple has finally admitted that there’s an iCloud and that…. well… read on.

The company behind iTunes, the iPod and that iPhone thingy has just come right out with it and said they’ll tell us all about the iCloud at its yearly bash known as the Worldwide Developers’ Conference.

WWDC has generally been the launch platform for each new version of the iPhone but as Apple looks to keep the focus on software this time round most reckon that the next gen iPhone wont get a look in next week.

iCloud will no doubt be revealed to be a music-streaming service which allows you to listen to (i)tunes stored up in the cloud. iCloud will probably have a look at what you own in iTunes and squirt those tunes to you wherever you are – so, if you’ve bought music as MP3’s from elsewhere I’m guessing it’ll ignore those. As for those you’ve ripped from CD – I’m not sure. I’m guessing Apple will be pushing the iTunes love when ever it can though 😉

Apple is feeling kinda smug right now as it has managed to strike deals with some tricky majors such as EMI, Warners and Sony.

So – do you reckon Apple will just have its head up in the iCloud or will it drop an iCloud ready iPhone on Monday 6 June as well?