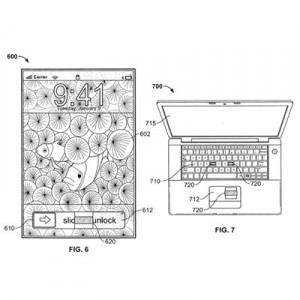 Apple has sent in a patent that AppleInsider have pounced on like a hungry wildcat.

The diagram shows how the fruity one plans to hide fingerprint scanners in future iPhones and MacBooks without the need to ruin those minimalist lines that fanboys and girls love.

Their idea is to slip the finger scanners under the MacBook trackpad and/or keyboard and under the screen of the iPhone.

Thereâ€™s even word that they may get the iPhone to check the shape of its ownerâ€™s ear before allowing a call to be heard and Macs to utilise their built in webcams for facial recognition.

I don’t really have to tell you that this could be purley experimental and not intended to turn up in final products.

It does seem to relate to recent hardware though:Â  The iPhones featured in Appleâ€™s diagrams include third party apps and even the voice recorder included in the 3.0 update.

So, will these biometric scanners appear in the new iPhone?