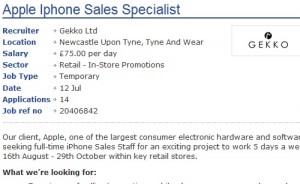 Could this ad be a sign that Apple are getting some extra help to cope with the rush of a surprise release?

The job posting for iPhone sales specialists has appeared on employment website, Reed and, reading between the lines, could indicate that there will be a need for more iPhone salespeople to pedal the new iPhone 5 this coming August.

There are a variety of adverts asking for the same things for different areas of the UK.

The only reason I can see for advertising for temporary specialist staff is that something major is going to happen mid-August.

Recruitment consultancy, Gekko, posted the ad on Reed states that they have worked with Apple in the past on shops within shops and as the advertised positions need to “ensure the Apple area within the store is effectively merchandised” points that these will be similarly placed.

If you are able to provide a “first-class customer service experience” and “capture the hearts and minds of potential customers” you’ll get four-days training in London and £75 per day when on the job.

Everyone has been guessing at a September release for the iPhone 5 in-line with iOS 5 but this new development could point to a ninja-like August launch. But then, there’s the store in St Albans that’s expecting a November launch.