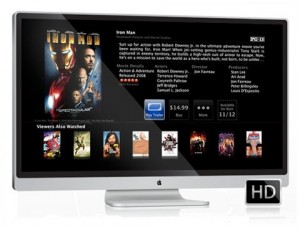 Apple is working closely with Foxconn and Japanese tech giant Sharp as they test out designs for the Apple iTV.

Word on the interweblogosphere has designs for the much-rumoured Apple iTV being put through their paces as the new Apple product gradually moves closer towards becoming pushed to the next stage.

The latest reports indicate that Foxconn and Sharp (previously rumoured to be supplying their screen tech for the Apple HD gogglebox) are working together over in Asia to come up with designs for the Cali gadget company.

According to the usually shadowy sources Apple has a few designs in the pipeline and is collaborating with Sharp on finding the right one for the iPanel.

One of the sources is quoted as whispering “It isn’t a formal product yet. It is still in the early stages of testing,”

It seems that, like Valve, Apple is keen to move in to your living room on a more permanent basis. In fact, Apple CEO Tim Cook confirmed to NBC news last week that the television market is an “area of intense interest.”

It will be interesting to see how the arrival of an Apple telly will hit the Smart TV market and how Samsung, Panasonic, et al will react.