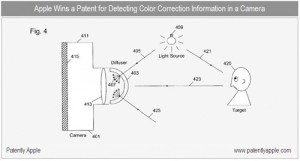 Could Apple be looking at other ways of using their alleged 5MP sensor?

Slipped in between 15 other patents granted to Apple this week is this one that goes into depth about colour correction in a compact camera. Not a camera shoved in an iPhone or iPad – an honest-to-goodness stand-alone number!

This is a handy follow-up to the Apple Camera patent that when in July last year.

The camera colour-correction patent is focused (arf!) on detecting the actual colorus in the shot, rather than just the lighting conditions.

The science bit in the patent explains it better than I can:

This could be another idea that never makes it out though. Apparently the first Apple Camera patent was submitted seven years ago! But, just think – we’ve already seen their first ever phone to use a forward-facing camera for vid calls this week 😉