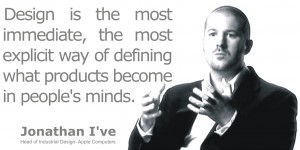 Jony, or rather Sir Jonathan, Ive has been awarded a knighthood in the New Year Honours list due to designing such classics as the iPod, Macbook, iPhone and iPad.

Apple’s head of design has been made a Knight Commander of the British Empire (KBE) which is a nice follow-up to his CBE that he recived back in 2005.

Describing his latest honour as “absolutely thrilling” Ive added that he was “both humbled and sincerely grateful.” He said, “I am keenly aware that I benefit from a wonderful tradition in the UK of designing and making”.

Sir Jony who can be credited with designing some of the most iconic gadgets to appear in the last 15 years said that he inherited a love of making things from his father, a silversmith, and spent much of his youth taking things apart to see how they worked.

“I discovered at an early age that all I’ve ever wanted to do is design.”

Born in 1967 he went on to study Industrial design at Northumbria Polytechnic, then founded an agency called Tangerine. Apple was so impressed with his work on a prototype notebook and love of fruit-based company names it offered him a full-time job in 1992. When Steve Jobs , who described Mr Ive as his “spiritual partner” in a recent biography, came back to Apple in 1995 Sir Jony gained more influence over the company’s products. This lead to the Ive-designed original iMac to be produced which helped Apple become the huge name it is today.

Sir Jonathan Ive’s work then hit the top of the tech charts consistently with the iPod, iPhone, Macbook, and iPad. Steve Jobs’ biographer Walter Isaacson did note, however, that it wasn’t always plain sailing between Ive and Jobs though.

In the Jobs biography Ive states that throughout the design process he pays “maniacal attention to detail to where an idea comes from, and I even keep notebooks filled with my ideas. So it hurts when he [Jobs] takes credit for one of my designs.”

We shouldn’t have to wait too long before we get to see Sir Ive’s latest work – iPad 3, iPhone 5 or Apple iTV set – what would you want to see first?