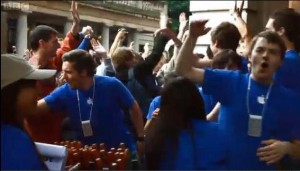 The movement led by the enigmatic iSteve known simply as Apple has a dedicated following of fanboys and girls but a cult?

The BBC investigated some tech superbrands and discovered that biting into Steve’s Apple induces a religious reaction!

The BBC programme called ‘Secrets of the Superbrands‘ has Alex Riley being mocked over his ‘classic’ Nokia by a group of school kids before setting out to see what all the fuss is about.

He asked a range of people what kind of person Apple would be and answers ranged from the expected “cool” and “hip” to “spoilt” and “the sort of person who might invite you to their birthday party, but when you got there you’d be doing everything they wanted to.”

Alex is around for the oddness that is an Apple store opening and finds himself confused by the hysteria surrounding the new Covent Garden flagship store’s first day.

Muttering “It’s a shop. Come in and buy some computers. Why is everyone so excited?”

He tries to get some inside information from World of Apple blogger Alex Brooks – this guy has been to around 30 Apple Store openings in various countries and so is a prime candidate to see what goes on in his head. Brooks is duly shoved into an MRI machine (takes me back to my days in the Medical Imaging Department at BDGH NHS Trust) and has his brain scanned in order to record his response to Apple tech flavoured stimuli.

When he’s shown pictures of Apple products which provokes increased activity in the visual centres of his brain.

When his reactions are placed side-by-side to those of someone who is aligned to a more Saint-based religion being shown religious iconography the neuroscientists noticed similar effects.

Apple is often described as a ‘cult’, there’s even a blog called Cult of Mac but now we have scientific proof.

During the show Riley manages to chat to an employee of the newly launched Covent Garden Apple Store but, part way through, a ‘friend’ whispers into the Apple worker’s ear and then, all of a sudden, the interview is ended and the employee disappears….

… this is typical of Apple as they don’t like talking to the press apart from some skillful leaks and, perhaps, leaving new devices in bars.

They do, however, love talking to lawyers 😉

Have you found yourself whipped up into a fury at an Apple launch?

Do you pray to iSteve and worship at a nice, new, shiny iMac?